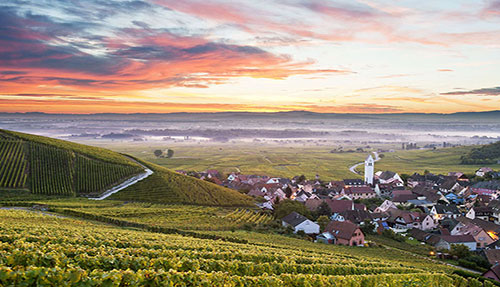 Stretching nearly 170 km from north to south and connecting 70 of the most beautiful wine villages in the region, the Wine Route has become one of the main tourist attractions in Alsace. REGINA TROIS EPIS is located at the heart of the Wine Route.

Since its inauguration in 1953, this Wine Route is one of the oldest in France and offers numerous wine- and vineyard-related activities all year round. A popular attraction, the villages connecting the Wine Route take turn organising wine and harvest festivals from April to October, where activities, concerts, processions and wine tastings take place one after another. Some people even spend an entire week here so that they can participate in these unique celebrations.

For many, the Christmas season is one of the most enchanting time of the year. In Alsace, the spirit of Christmas differs in every town and village; it all depends on what the townspeople and villagers have to offer. Visitors can immerse themselves in a magical moment in Christmas markets, particularly at nightfall when beautiful lights bathe the entire village or town in their warm glow.

Take advantage of the close proximity of Trois-Épis to some of the most stunning Christmas markets you will ever see! Do not miss the special Christmas atmosphere in Kaysersberg, Colmar, Eguisheim, Riquewihr, Ribeauvillé, Sélestat, Strasbourg ... It will transport you to another world ! 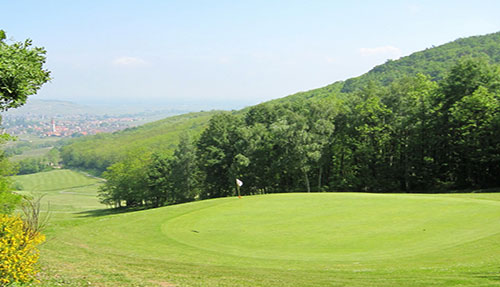 Until the Second World War, Ammerschwihr was a prosperous town. It suffered heavy damage during the Battle of Alsace in the winter of 1944. However, thanks to the post-war reconstruction, the town was restored to its former charm and tranquillity. You can admire the Bourgeois Tower and the Tower of Thieves dating back to the Middle Ages, the Fountain of the Wild Man, the Renaissance-styled High Gate, and the Church of St Martin. Formerly one of the finest examples of Renaissance architecture in the area, the ruin of the Town Hall bears testimony to the bombardment during the war, which destroyed 85% of the villages in the region.

Golf lovers can also take advantage of the 5207-metre long, 18-hole Ammerschwihr golf course that is located in the peaceful and relaxing hilly setting.

Lined with colourful, decorated half-timbered houses with oriels, this small village nestled comfortably in the midst of vineyards is certainly worth a visit. However, the village’s peculiarity lies in the twisted bell tower of the Church of St Gall, a unique characteristic in Alsace and one that is very rare in France. It is truly an architectural achievement; there are only a hundred churches with this feature in Europe. Twisted from right to left at an angle of 45°, the octagonal spire of the church tower is covered with glazed tiles dating from the thirteenth century.

Kaysersberg – or Emperor’s Mountain – is a place not to be missed. Its rich architectural heritage spanning several epochs gives the town an exceptional character, earning it the title of the ‘Most Beautiful Village of France’ in 2017. Simply walking through the streets of the historic centre will transport you back in time. That should not stop you from visiting other attractions in town: the twelfth-century Church of the Holy Cross, the thirteenth-century imperial castle overlooking the town, the fortified bridge, the fortification towers, the Renaissance Town Hall, and the museum paying homage to the doctor and Nobel Peace Prize winner Albert Schweizer.

Children between 4 and 12 can also participate in an activity trail. Go to the tourist office to obtain the activity sheet. Fill it up with the answers to the riddles and bring it back to receive a prize ! 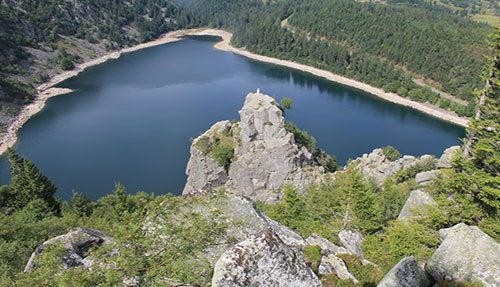 Located in the heart of the Vosges, Orbey was successively ruled by the counts of Eguisheim, Ferrette, and later the lords of Habsburg and Ribeaupierre. Until the sixteenth century, the Cistercians were very prosperous. They founded the Pairis Abbey in this village, which was unfortunately not spared in the peasant revolutions and religious wars.

The surrounding forests, farms and textile units of Orbey supported the military in the battles of the First World War and those of the Liberation in December 1944. As a result of these battles, the village was severely damaged.

Orbey’s lush environment, lakes (Lac Blanc and Lac Noir) and facilities like the ski resort will surely not disappoint visitors in search of green tourism.

Those interested in history can also visit the Linge Memorial Museum, which commemorates the 17,000 soldiers who perished during the Battle of Linge in the First World War. Artefacts found on the battle site and remains of military trenches are displayed in the museum. Drop by the Wettstein Military Cemetery, where 3,538 people who died in the First World War were laid to rest.

The capital of the Wine Route, Colmar’s largely pedestrian historic centre has preserved its architectural authenticity and romantic atmosphere. For those who like to stroll through the streets and alleys, you can admire the half-timbered houses and old residences, including the House of Heads adorned with carved masks, or gaze at the boats sailing peacefully on the river Lauch in the picturesque district of Little Venice.

Museum lovers will also have something to celebrate : Colmar has five museums, including the Bartholdi Museum, which houses works that the sculptor of the Statue of Liberty left in his hometown. The Unterlinden Museum, situated in the former Dominican monastery, is one of the most beautiful fine arts museums in France; the famous Isenheim Altarpiece is displayed in this museum.

Surrounded by vineyards on gentle hills, Eguisheim is a small fortified mediaeval village built in the plan of three concentric circles around the castle, the chapel and the Fountain of St Leo. It has won numerous accolades – such as being one of the ‘Most Beautiful Villages of France’ in 2003 – and is a must-visit when you are visiting Alsace.

The village has many secrets waiting to be discovered: the eight-century Castle of St Leo, which was the birthplace of Pope St Leo IX (whose relics are preserved in the Chapel of St Leo); the castle wall; the Church of St Peter and St Paul with a bell tower built in 1220 and a thirteenth-century tympanum; the fountains at the marketplace, of the Virgin, of the Lower Gate and St Leo. These great buildings stand out amidst the many homes of winegrowers. Climb Schlossberg, a hill on which three castles of Eguisheim from the eleventh and twelfth centuries – Weckmund, Wahlenbourg and Dragsbourg – are located. 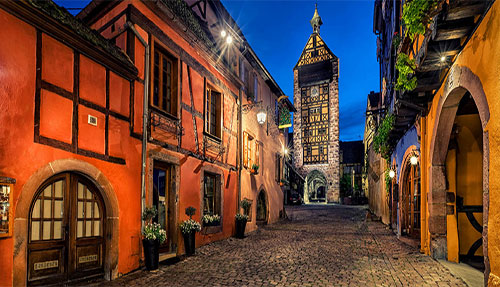 Home to an amazing combination of architecture from the Middle Ages and the Renaissance, Riquewihr is an Alsatian village that you should definitely visit. With half-timbered houses from the thirteenth to eighteenth century lining its streets and the Dolder Tower (a thirteenth-century half-timbered fortified gate) rising from their midst, Riquewihr has earned several accolades over the years, including being one of the ‘Most Beautiful Villages of France’ in 2003. 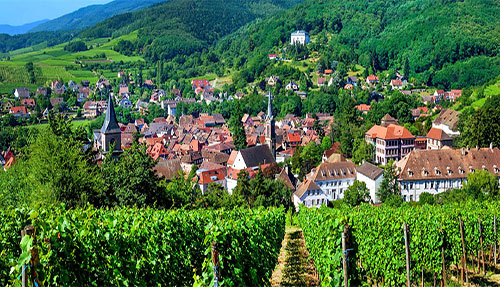 The ruins of the three fortified castles of Saint-Ulrich, Girsberg and Haut-Ribeaupierre bear testimony to Ribeauvillé’s past as the seat of the lords of the Ribeaupierre family, an influential dynasty in Alsace from the Middle Ages to the seventeenth century. On the long, steep walk to the fortresses, enjoy the breathtaking views of the town’s roofscape, vineyards, the Vosges and the Alsatian plain extending to the Black Forest.

While strolling on the Grand’Rue and scenic districts in town, you will be able to explore spaces adorned with Renaissance-style fountains; the main bourgeois houses, including the House of Fiddlers, which has a uniquely decorated frontage dating back to 1683; the eighteenth-century Town Hall, with its prestigious collection of silver hanaps (drinking goblets). Only part of town’s mediaeval fortifications is preserved; sections of the wall and some defensive towers, such as the thirteenth-century Butchers’ Tower, can still be seen today.

Dominating the Alsatian plain at 757 metres above sea level, the castle was once an important military asset and is one of the two largest castles in Alsace alongside that of Hohlandsbourg. From its strategic position, the fortified castle was relatively easy to defend. You can also enjoy a breathtaking view of the plain of Alsace, the Vosges, the Black Forest and sometimes even the Alps from the castle

Once you have crossed the drawbridge, you will be able to explore the fully furnished spaces, the mediaeval weapons collection, and even climb to the top of its keep and great bastion.

An open-air museum, the Ecomuseum is laid out like a real Alsatian village in the twentieth century. Travel back in time by exploring the streets, gardens, river and all of the buildings in the museum. Each building houses an exhibition detailing the skills and crafts of villagers, such as a housewife preparing traditional dishes, a teacher in a class, or a potter in his studio.

Backed by an exceptional heritage and a history of over a millennium, the well-preserved village of Sélestat has more than thirty protected buildings as well as several vestiges from the past. Among these include the remains of the citadel, magnificent churches and charming residences from the Renaissance and the eighteenth century.

Sélestat also has the Ill*Wald, one of the largest regional nature reserves in Europe, boasting 2,000 hectares of meadows, forests, marshes, etc. The asterisk in its name symbolizes the interaction between nature and man at the site.

Formerly named Ehensheim, this town was first mentioned in a text dating back to 778. A mediaeval town, it was also the imperial city of the Decapolis in the thirteenth century, as well as the legendary cradle of St Odile. The town has retained much of its historical charm, such as its ramparts, fortified towers (including the Kappelturm or Chapel Tower which served both as an observation tower and a belfry), half-timbered houses and narrow streets.

Regarded as holy grounds, Mont Saint-Odile has a rich religious heritage and has been a popular pilgrimage site since the Middle Ages. It bears the name of a daughter of a seventh-century Merovingian nobleman, who was held to be a miracle-worker and is now considered the patron saint of Alsace. Dominating the Alsatian plain, Mont Saint-Odile was for a long time also the site of an important monastery. 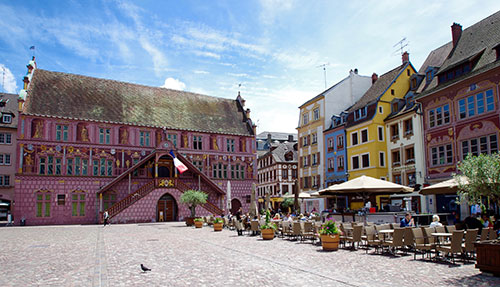 Immerse yourself in the historical and cultural wealth of the city. Besides the old City Hall, the Protestant St Stephen’s Church and the Loewenfels House, some of the most prestigious museums in Europe can also be found in Mulhouse. These include the Automobile Museum, Train City, and also other museums that showcase the industrial past of the city, particularly in the textile industry as presented in the Museum of Printed Textiles and Wallpaper Museum. With so many things to visit and see in Mulhouse, you will not have time to get bored ! 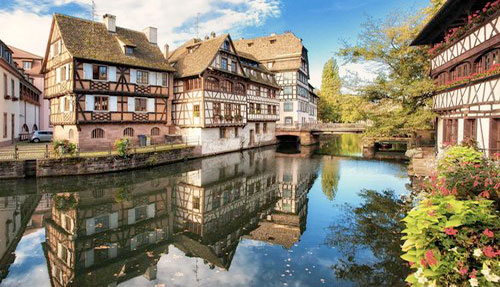 Situated at the crossroads of French and German influences, the Grand Île of Strasbourg is a splendid urban ensemble that has been a World Heritage Site since 1988. With its mix of daring contemporary architecture and rich historical heritage, Strasbourg will never stop surprising you.

It would be too long to list all the attractions, but here are some of them: have a walk through Little France, which comprises the Great Lock (sluice), Vauban Dam, Tanners’ House, and covered bridges; visit the Cathedral of Our Lady and its gigantic astronomical clock; and also explore Place Broglie, where you can find among other things the Strasbourg Opera House and City Hall, and Place Kléber. The National and University Library, Botanical Garden, Observatory and Archaeological Museum, Museum of Decorative Arts, and Museum of Fine Arts should also interest culture enthusiasts. In addition, Strasbourg is also home to the Palace of Europe and Palace of Human Rights; it is also the seat of the European Parliament.

You will only be scratching the surface of the Alsatian capital’s beauty if you are visiting just for a day.

Just an hour from Strasbourg, you will be able to have fun at Europa-Park in Rust in Germany. This theme park is sure to delight young and old with its thrill rides and magical scenery.